What do you get when you marry personalized and influencer advertising? 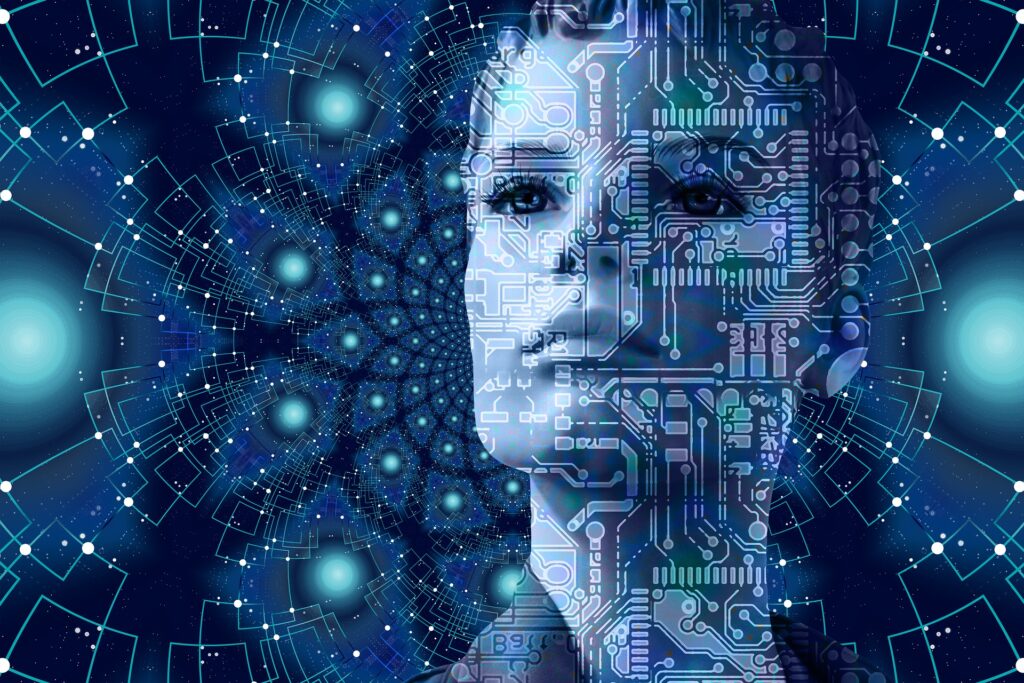 Jenny enjoys sharing her cooking prowess. She just had a great stream displaying her new pie recipes. 134 watched, a new record! She knows many of her viewers; George is from Chicago and constantly asks her to repeat in ounces and pounds or whatever units he’s using; Josephine is from Paris, she sends ooohs and emojis when the dishes come together. When Jenny consulted her dashboard, it showed her that most of her audience were Europeans, mainly females; no great surprise there, but a growing part was in the USA. It made two recommendations:

1. if the streaming times were better for the USA, she would likely get more viewers.
2. for her demographics – morning hours are best. She did not even consider that.

Today, Jenny tried something new: before the stream, the dashboard indicated that if she would recommend Celi’s recipe book or Chipta’s knives, she could make some money. She did, and now she has $34.5 in her account. Exciting! Later, she got a $10 bonus when four of her viewers followed through and bought Chipta’s knives.

In the real world, monetizing is an uphill battle for micro-streamers. Unlike more significant influencers, Jenny will not be able to sign with a brand because it will not spend the time/money to sign a contract with someone who has 100 viewers; it is just not worth it for the brand. In addition, common wisdom is that streamers should work on growing their audience until at least 1000 concurrent views before trying to monetize, so Jenny is told she should not even try. Unlike low-traffic websites, the analytics available for small streamers – to understand their audience and the impact of product placements – are scarce. Because there is no RTB for streamers, they can’t programmatically find advertising opportunities. As a result, this huge and growing market, one with tremendous potential – that of micro streamers – has not been getting the attention it deserves.

Did you know? If you look at the potential for clicking on an advertisement, 90% of it is in streams with under 500 viewers. Most of the potential market is not even being served!

Personalized advertising is based on knowing everything you can about the person and her intent. You may know the gender, age, number and age of kids, location, political affiliation, hobbies, etc. This is how companies like Meta can customize advertisements so well. Personal information is collected about people from many sources and aggregated. There is an economy of scale: the more you know about people, the better you can target them for what they want, which favors large scale. The second leg on which personalization stands is intent. You may know what the person is looking to buy by seeing his searches, which is why Google is valued so much. You can learn much about the intent (and demographics) by tracking online behavior. Suppose a person reads an article on bike comparison. In that case, this information is recorded, and later, he may get advertisements from merchants who sell bikes or accessories, regardless of where he is on the internet.
Personalization is currently the most crucial advertising differentiator, the main reason for the high evaluation of Meta, Google, Amazon, and many other internet companies.

Influencer marketing can be of multiple types. In one type, the influencer, usually a celebrity, tells their viewers that to be more like them, they should wear the same clothing (they may not even have to say anything but be compensated for wearing that outfit) or use the same perfume, or “be like Mike.” A second type is when the influencer is promoting something he is an expert in, e.g., if a chef promotes kitchen equipment or a race driver promotes a car. It may seem that while there are many new media, for example, YouTube, Instagram, and streaming platforms, the basic idea is the same as television and print. There is an influencer who has a large audience and tries to promote products or services. However, from the point of view of marketing, there is a difference in targeting. While on TV and print, the audience is a general audience, maybe self-selected for the program (e.g., sports), when the influencer has his own channel, the audience is better defined and tuned in to watch that influencer. Having a more targeted audience is key in getting more effective advertisements, and the fact that the influencer has his own channel is advantageous. Influencers usually have sponsorship deals with big brands, those with a setup to work with influencers.

Can we do better?

In live streaming, the influencer – the one who is streaming – can discuss with his audience.

Smaller streams are unique. According to Ori Arditi, CTO of Show, the smaller the stream, the more engagement one has. Micro-streamer often knows their audience and addresses them by name. As a result (a not very surprising one), the smaller the stream, the higher the likelihood per viewer of actually engaging with advertisements or any other streamer suggestion. For example, for this article, Ori looked at 44578 streams going all the way from one to 2135 viewers and discovered that the median number of viewing hours is at streams with 130 viewers, which consist of 94% of the streams – showing the importance of small streamers. In other words, half the viewing hours were of channels having less than 130 viewers. However, what is striking is that for the number of clicks on advertisements, the median is on streams with less than 39 viewers. Streams with less than 39 viewers, which happen to be 74% of the streams, have less than 5% of the viewing hours, the end of the long tail, representing half the advertising impact due to the vastly more engaged audience. Or, more succinctly, small streams have 5% of the viewing hours but 50% of the advertising potential.

If one looks at the click-through rate as a function of the number of viewers, it is obvious that something extraordinary happens in the smaller streams, where personal conversations occur. 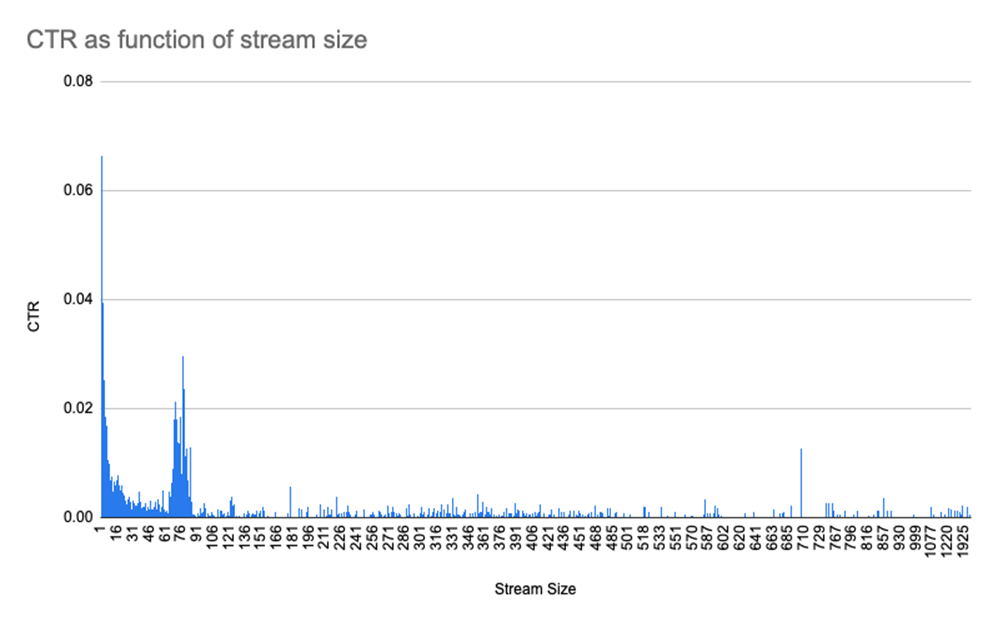 It turns out that small streams with less than 1000 views, maybe even 100 views (micro streamers), may be one of the best places to advertise. This is due to the following reasons:
● Better engagement (see above)
● More focused audience, which becomes similar to personalized advertising aimed at the multitude
● Word of mouth effect as the streamer and her audience are very familiar with each other

Is this a significant market? Is it growing?

According to statistics, this unserved market of the streaming industry is vast and growing. Not only more than half the viewing hours are in streams of less than 1250 audience size, but because of the higher engagement in smaller streams, the long tail of small streams has much larger advertising potential than the total market of well-known influencers with thousands of viewers. If we go by clicks on advertisements, the likely median is 150, meaning half of all the ad clicks are expected from micro and nano streamers. This is a conjecture, as we don’t have the data for the entire streaming world, just that of Show, but seems very consistent with our observations.

So what is the next step?

One needs to prepare a frictionless onboarding mechanism for small live-streaming influencers. As each is not worth a lot of money to an advertiser, it is impossible for a regular streamer onboarding to have a positive ROI. Currently, if you are a streamer, you look for a sponsor, a brand. However, if you are a micro-streamer, you can’t sign a contract, do promotion for one brand, etc. A brand will not sign a contract with someone worth a few hundred dollars. Onboarding needs to be as simple as it is for a small website to work with google ads. Something the streamer can do by themselves to onboard without needing any help. Given that this is a different technology, not a regular webpage, this is not simple.

Micro-influencers need help; they are not yet professionals. They need to get a very intuitive dashboard that provides interesting insights about their audience, helps them improve and teach them what they need to do to engage better and increase their audience, that shows them if the fact that they are advertising things is getting a warm or cold welcome from the audience, and which actions are better for them. Those that are growing their market may decide not to advertise yet but will be happy with some analytics that helps them understand how well they are doing.

We also need a very smart analysis of their audience. It is likely a small and fairly homogenous audience as micro-influencers generally appeal to more specific audiences, but we need to understand it and use this understanding to match advertisers with them. All the common technologies used in digital for understanding audiences are not relevant here as people are not logging in to a website; instead, all we see are their handles in the streaming platform. How can we learn more about each individual? For example, how do we charge advertisers looking for middle-aged French people where we think 38% of our audience is their target audience but maybe some of the others are also actually of the target demographics but we can’t be sure? If we get paid 10 cents for every person of the target demographics, and we know 60% of our viewers, and know that 90% of them fit the targeting criteria, can we assume by deducing that 90% of the channel’s entire audience fit the targeting criteria and charge for them? can we only charge for 54% of the channel’s viewers (90% of 60%)? or do we charge a different price for different certainty levels – i.e. one price for certainty and a smaller price for the assumed subset?

Micro-influencers advertising has a lot going for it. It is a large and growing market segment, a very appealing one as the micro-influencers are on speaking terms with their audience. It is almost a word-of-mouth campaign where the product placement is likely to yield, a very high return. It is not a simple market technologically. To enable it – multiple components are needed: We need audience analysis in live-streaming platforms, we need the equivalent of an RTB for streamers, where the RT is not really needed as the bidding is not real-time but close to it, and we need technology that onboards micro streamers and also helps them work better with their audience. This is likely coming; the opportunity is just too big to continue to be unserved for a long time. It is not low-hanging fruit, there is lots of work involved, but it’s a very nice fruit indeed.